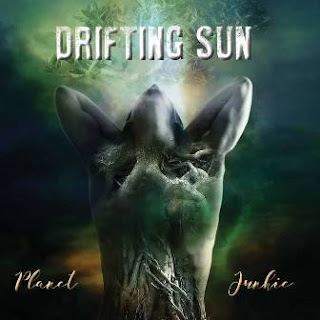 I discovered Drifting Sun with the release of Trip the Life Fantastic (2015), and I have been following them since then. I don't know how they do that, but with every new release, they become better and better.
The band's new album is Planet Junkie, which, in my ears sound different than their previous works. Maybe one of the reasons for that is the absence of Peter Falconer, the band's singer. I don't know why, but suddenly Drifting Sun left without a lead singer.
Pat Sanders, the band's leader, decided to invite some singers he already knew, in order to participate in Falconer's place. Three of them accepted the invitation, so Planet Junkie includes three lead singers instead of one; which add a lot in the album's dynamic.
The album is separated into 3 major parts, and on each part, there is a different lead singer. These 3 parts are divided by an instrumental piece. So, Planet Junkie includes 9 songs and 2 instrumental pieces.

As far as I know, Pat Sanders faced many difficult situations in his personal life lately, and many of those situations are reflected in Planet Junkie. The album is filled with wonderful and melancholic melodies, which, in my opinion, has always been the strong point in their music. Pat is a skilled composer and musician, and he is able to write some heartbreaking melodies which I adore, and this album is not an exception.
But the album is not only about melancholy and drama. It also includes some uplifting songs, like Planet Junkie and Within Your Bones, for example, which are excellent.
I'm sure that the fans of the band will enjoy this album a lot, but because this is not a typical Drifting Sun album, you should listen to Planet Junkie, even if you never liked their music before. Maybe you will be pleasantly surprised by its quality. Just listen to the album and form your own opinion.
As far as I know, the album will be available on CD and as a digital download. For more info on the subject, visit the band's webpage: http://www.driftingsun.co.uk/
Also, you can check their bandcamp page:
https://driftingsun.bandcamp.com/
Favourite songs so far: Within Your Bones, Missing, Night Time Sorrow, Planet Junkie, Stay with Me.
My Rating: 4.5 stars. (Out of 5.0)
Here's a couple of songs from the album:
Missing
Planet Junkie
Night Time Sorrow

Posted by GFreedom at 7:37 AM No comments: 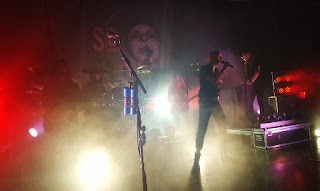 A few days ago, SOEN visited Athens for a live gig, as I wrote above.
It was their first time here, and hopefully not the last. 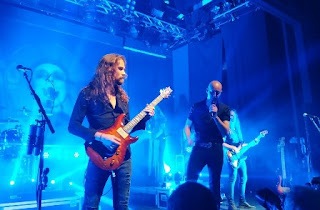 I really enjoyed their latest two albums, Lykaia and Lotus, and I was very curious to see how they are on stage. 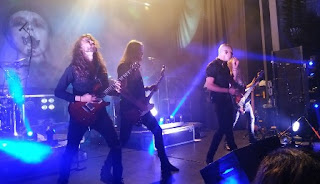 Well, the guys were really good! They played for almost 90 minutes and their setlist was based mostly on the two albums I mentioned above; which was perfect for me!
They were powerful, and they played their songs very well. Actually, a couple of songs sounded better on stage, in comparison with the album versions.
SOEN are getting better from album to album, so we can only hope that they will continue like that. If you see that they are playing somewhere near you, try not to miss them!
Here's the setlist: 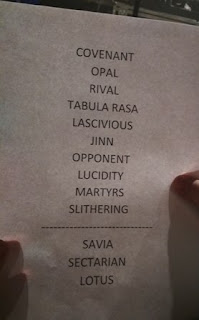 In a couple of weeks from now, on September 5th, the Swedish band SOEN will give a live gig in Athens for the first time.
This year, Soen released their 4rth studio album, Lotus, which is a very good one!
( If you are interested, you can read my review here: https://gfreedomathina.blogspot.com/2019/03/soen-lotus-2019-my-review.html ).
The tickets are on sale, and they cοst only 22€.
I made a small research, and as far as I saw, the setlist they are playing in their tour is based mostly on their 2 latest albums, Lotus and Lykaia. That is a very good thing, because both albums are good ones.
I haven't got a ticket yet, but I'm planing to buy it soon.
So, if you are living in Athens or you are just a visitor, here's a very interesting event for you!
C U there!
P.S: Here's a small sample: https://www.youtube.com/watch?v=5Gi1IsFL-hs
Posted by GFreedom at 9:29 AM No comments: 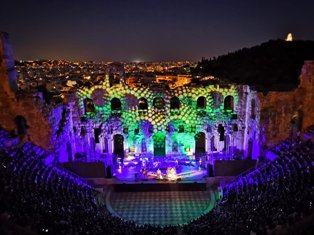 A few days ago, Dead Can Dance visited Athens for a concert at the Herodus Atticus Odeon, which is situated exactly under the Acropolis of Athens.
It is a majestic ancient theater, which creates a wonderful atmosphere for these kind of events, and as Brendan Perry stated a few months ago, it was a dream of his to play in this theater at some point. 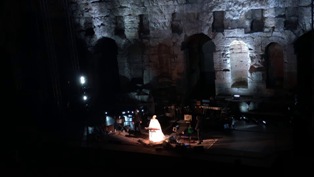 Having been a fan of Dead Can Dance since the 80's, it was impossible for me not to go to their gig, despite the fact that I have seen then 3-4 times in the past. So, I bought my ticket on the first day of the pre-sale, and then I was just counting the days. The concert was sold out many weeks before the day of the event, and the place was packed!
Dead Can Dance came on stage almost on time, and for the next 100 minutes gave a flawless performance, which, further than their songs, it also included 2 cover versions. 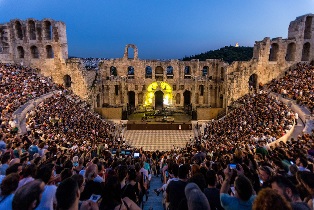 They played songs from their long career, and as far as I saw (and read), everybody has only good words to say about their gig.
It was a magical night, which I will remember for many years. I feel lucky for being able to see them once more in this amazing theater!
Here you can take a look at the concert's setlist: 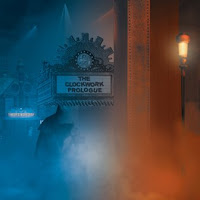 A couple of years ago, Gandalf’s Fist surprised everybody with the release of the excellent - but kind of ambitious - The Clockwork Fable. It was a really interesting triple concept album that introduced us to the underground city of Cogtopolis and its bizarre inhabitants. With that album they increased their fame and the band begun to play at various festivals, such as HRH Prog in North Wales for example, where they were the headliners on the 2nd stage.
This year they returned with The Clockwork Prologue, which works as a prequel, if I got it right. The band now includes two more members in comparison with The Clockwork Fable; Keri Farish on vocals and Ben Bell on keyboards, bass, guitar and vocals.
Although The Clockwork Prologue is similar with The Clockwork Fable, it is slightly better in my opinion. Not only because it includes all the elements that we enjoyed in the previous album, like for example the theatrical narration parts that work as a “bridge” between the songs, but also because it is shorter, therefore less “chaotic”, and it can be appreciated better and faster.
There are lots of wonderful melodies throughout the album, strong guitar riffs, beautiful changes, and let’s not forget the really interesting story, on which, both albums have been built.

At the very beginning of this post, I wrote that with the release of The Clockwork Fable, Gandalf’s Fist surprised everybody. I’m afraid that the element of surprise is not going to work this time, mostly because now people know what to expect. But that doesn’t make the album less enjoyable!
So, to sum up, The Clockwork Prologue is a great album and without a doubt a very serious piece of work! Definitely one of the best releases of 2019 so far. And as far as I’ve heard, this time it will be available in vinyl edition as well. Good things are happening to good bands…
Congratulations to Gandalf’s Fist once more, not only for releasing really good albums, but for their hard work and for keeping their quality at very high standards.
Favorite tracks (so far): Solar Huntress, Wanderer, Supplies for the Festivities, The Clokkemaker, Blackening.
My Rating: 4.5 stars
Posted by GFreedom at 12:24 PM No comments: 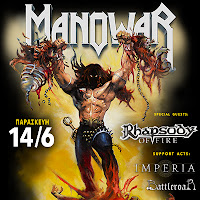 The 3rd day of the Release Festival in Athens was a pure Metal one!
The line up included the Greek band Battleroar, the Norwegian band Imperia, Rhapsody of Fire from Italy, and Manowar from The United States as Headliners.
A very big crowd gathered that day, mostly for Manowar, and not so much for the other bands. 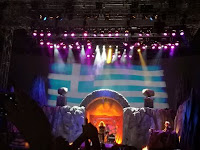 Despite the not so good sound, Rhapsody of Fire played very good, but when Manowar climbed on the stage, there was a sound explosion that lasted for almost 100 minutes. The only complain that everybody had was that Manowar's setlist was not including not even one song from their legendary album Into Glory Ride. Further than that, Manowar's performance was powerful and excellent. (Let's not forget that their 2 basic members are almost 65
years old).
Here you can check the setlists of Rhapsody of Fire and Manowar:
RHAPSODY OF FIRE:

Distant Sky
The Legend Goes On
Dargor, Shadowlord Of The Black Mountain
Courage To Forgive
March Against The Tyrant
Rain Of Fury
Dawn Of Victory
Holy Thunderforce
Master Of Peace
Emerald Sword

Hello all!   I would like to inform you that, today I uploaded the presentation we did on King's Ransom a few days ago in Prog & ...

GFreedom
I have been dealing with music since I remember myself. I bought my first (vinyl) albums at the age of 11, and since then I continued dealing with music, both proffesionally and as a hobby. I worked as a DJ at various bars and clubs for almost 15 years, and when I stopped, I begun the internet radio show Prog n Roll on Justincase radio. I'm a motorcycle fan and whenever I have the opportunity I like to hit the road.